Hope for the New Year

December 2020
Lessons from Everest - and life - about hope, fear, challenges, and how to manage it all as we approach the new year.
ESSAYS & INSPIRATION, MOUNTAINS & ADVENTURE
hope,inspiration,perspective,Rebecca Solnit,Rene Descartes,Thursday Thought 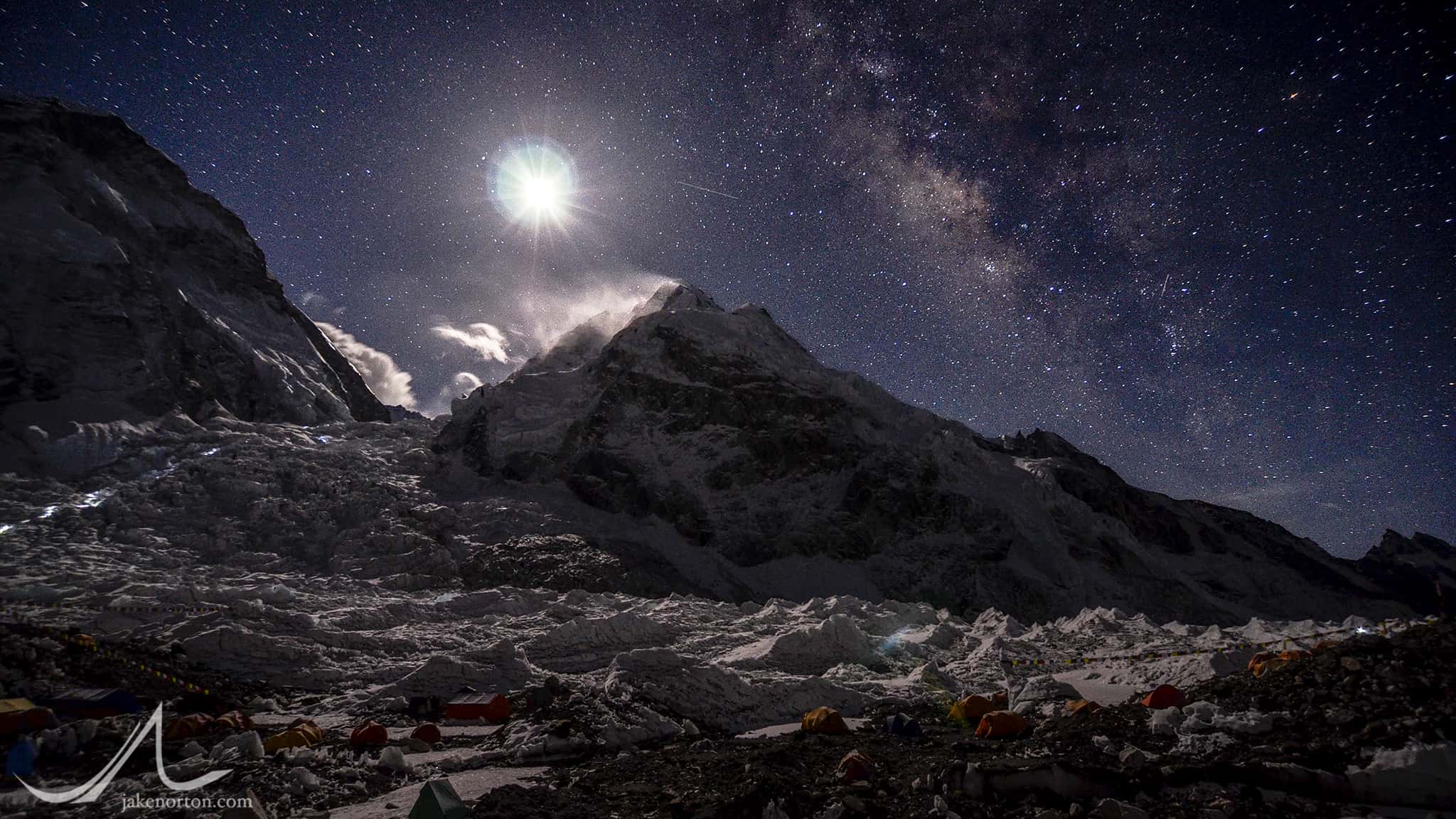 Hope is a funny thing I realized as I looked down between my legs at the gaping emptiness below. My crampons creaked in the brittle ice, offering little security on a face of fractured molecules rarely exposed and rarely climbed.

This was supposed to be easy, smooth sailing on styrofoam snow up to the West Ridge. But, nothing’s ever really easy on Everest, especially if you’re off the main route as we were. Our small team - Dave Morton, Charley Mace, Brent Bishop, and I - were attempting to repeat the route Tom Hornbein and Willi Unsoeld climbed in 1963, a pioneering effort of strength, tenacity, and dire uncertainty.

We were trying it largely unsupported, with no Sherpa support above Camp 2, and filming the whole thing. This meant heavier packs, hours of laying out rope and shuttling supplies from one camp to the next, cutting the easy tether, the umbilical cord of security that is modern Everest climbing.

As I belayed Dave up to me - putting more faith in his abilities than in my feeble anchor built of two screws in friable cookie-dough ice - I wished it would stop being so damn hard. I wished it were easier, simpler, that we could just cruise up the face and onto the West Ridge as we had planned, as we had dreamed for so long. I wished the rocks would stop falling on us, whizzing by with terrifying regularity, their gut-tightening trl-trl-trl-trl sound - like the wing beats of a hummingbird - making every muscle clench with anxiety, eyes scanning the face above. I wished my pack wasn’t so heavy, that it wasn’t so damn cold, that the ice could at least be solid rather than a brittle amalgam of aerated freeze and bits of ancient rock ground down over eons. I wished. I wished a lot.

Three years earlier…that’s what I wanted, what I wished for. That year, it was easy. In spring 2009, we climbed Everest on the standard route, the Southeast Ridge. I had climbed it before. It was simple, straightforward, well-supported, and well laid out. We had good weather and a strong team, nice conditions and solid health, and we marched to the top. I spent two hours on the summit. It was easy, it was bliss, it was simple. It was boring. We went up, we went down, we went home. The simplicity of it all, the total lack of hardship, of bad weather and bad experiences, rendered the expedition somewhat vanilla, any accomplishment diminished under the weight of its own ease.

As Dave led out the next pitch, I had some time to think, to stew in my frustration, to wallow in pity at the unfairness of it all and the hardship we faced. I imagined the team in 1963, cruising up this same terrain, stomping along on nice snow with ample support. And, I remembered one of the climbers that year, Dick Emerson, was not only climbing, but also conducting research for his PhD dissertation on the role uncertainty plays in motivation. His thesis - that the greater the uncertainty, the greater the motivation - was borne out by the ‘63 West Ridge team. Beyond all expectation, faced with overwhelming uncertainty, Hornbein and Unsoeld climbed the West Ridge, ascending a route no one had ever seen, and then descending a route they had never seen, bivouacking at 28,000 feet and rescuing two teammates in the process. Indeed, the remarkable uncertainty of the outcome in 1963 led to Tom and Willi having incredible motivation, tenacity, willpower, and strength to do something seemingly impossible. Reflecting on naturalist Horace-Bénédict de Saussure’s experiences in the Swiss Alps, Robert MacFarlane wrote in Mountains of the Mind a complementary concept:

...risk-taking brings with it its own reward: it keeps [de Saussure’s] "continual agitation alive" in the heart. Hope, fear. Hope, fear - this is the fundamental rhythm of mountaineering. Life, it frequently seems in the mountains, is more intensely lived the closer one gets to its extinction: we never feel so alive as when we have nearly died.

Robert MacFarlane, Mountains of the Mind

Our team didn’t meet as much success in 2012 as they did in ‘63. After weeks of effort, and lots of close calls, we finally had to abort our climb far short of the summit. But, in hindsight, the trip was one of the best of my eight Everest expeditions, and one of the best on all mountains, because it was rife with struggle, challenge, unknown, uncertainty. And, along with a Dick Emersonian increase in our motivation, the challenges we faced in 2012, the repetitious rebuffs by ice and rocks and weather, made us work better as a team, supporting and protecting one another, laughing and crying, climbing and flailing and living as a unit. It wasn’t paradise, it wasn’t simple, it was far from perfect, we didn’t even get close to the summit; but, in many ways - and perhaps in the most important ones - we succeeded.

As we close out 2020, I find myself (likely not alone) yearning for some bliss, hoping that 2021 will bring clear skies and good snow for us all. I’m weary of the challenges, weary of death and suffering, division and vitriol, unethical leadership and hubristic politics. My heart breaks for all those who have lost so much - income, housing, loved ones, life itself. I cry for those who struggle under the pervasive, ingrained inequities of our stratified society, the racism, sexism, elitism that seems at times hard-wired into our collective psyche, our national DNA. I anguish over the mistrust of science and the punishment our earth faces because of that mistrust and inaction.

And yet, when I adjust my lens a bit, I can see a slightly different view through the haze and smoke of 2020. Despite its cruelty and withering assaults - or perhaps because of these - the past year has ignited glimmering sparks of hope. The senseless killings of George Floyd, Breonna Taylor, Ahmaud Arbery (read an amazing account of his life in Runner’s World or listen to it on This American Life), and countless other Black and Brown fellow citizens sparked an outrage - and a collective recognition of the very real, very structural, very stubborn racism in our country, and lit fires across the nation to create meaningful and lasting change, the likes of which we haven’t seen since the 1960s. Fires that ravaged California, Colorado, Oregon, and the mountain west forced upon many a twofold understanding of the need to better fund, manage, and protect our public lands as well as the fact that climate change is here, it is real, and it is time to start addressing it honestly and actively. The COVID-19 pandemic still ravaging the entire globe has decimated people, communities, and economies, isolating us all…and yet through the isolation and tragedy, COVID has obliged us to understand our need for human connection over division, and the interconnectedness and interdependence of our world: We’re all in this together. The perverse, unceasing amorality and dearth of ethics in our president pushed upon us the greatest division and rancor our nation has seen since perhaps 1860, and yet - despite juvenile attempts to destroy it - he managed to spark more engagement with our democracy and elections than ever before, and unintentionally brought in a change in leadership with Biden/Harris, and we’ll soon see a marked shift in the color, sexuality, and (hopefully) demeanor of our highest offices.

2020 has been a rough year, there is no doubt. All of us have lost something, and many have lost more, suffered more, endured more than anyone should. It’s natural to yearn for, hope for, pray for an end to it all, to wake up tomorrow to a utopian world, one of sunny days and smooth seas and no challenges. But, in truth, those days don’t exist, that world doesn’t exist. Life, like a mountain, is - if it’s anything - struggle inherent. It’s about the pitfalls and setbacks, the hardships and storms we weather, the close calls and the falls, the lowest lows and the highest highs. And, the danger in hope is it can get out of control: as we hope, we begin to envision, and that envisioning can easily lead to the dream of the non-existent utopia, a budding certainty that tomorrow all will be perfect, paradisical. As Descartes noted in The Passions of the Soul:

When hope is so strong that it altogether drives out fear, its nature changes and it becomes complacency or confidence. And when we are certain that what we desire will come to pass, even though we go on wanting it to come to pass, we nonetheless cease to be agitated by the passion of desire which caused us to look forward to the outcome with anxiety.

Rene Descartes, The Passions of the Soul

No, Dick Emerson was right, as was de Saussure and MacFarlane: We need - we rely on - a degree of uncertainty, of suffering and hardship and woe, maybe even a little calamity, to keep the fire burning at the end of the tunnel of hope. These are the things that keep us going and growing, climbing and changing in this journey of life. While I by no means wish more hardship on anyone, we need to keep our hope for 2021 in check and not allow it to become expectation and lead to “complacency or confidence.”

In Hope in the Dark, Rebecca Solnit said it well:

Paradise is not the place in which you arrive but the journey toward it. Sometimes I think victories must be temporary or incomplete; what kind of humanity would survive paradise? The industrialized world has tried to approximate paradise in its suburbs, with luxe, calme, volupté, cul-de-sacs, cable television and two-car garages, and it has produced a soft ennui that shades over into despair and a decay of the soul suggesting that Paradise is already a gulag. Countless desperate teenagers will tell you so. For paradise does not require of us courage, selflessness, creativity, passion: paradise in all accounts is passive, is sedative, and if you read carefully, soulless.

2021 is nigh, and with it will come positive change and much good - of that I am certain. I’m equally certain the new year will bring its own host of challenge and strife and calamity, setbacks and hardship for some or for all. May we all hope it doesn’t, be prepared when it does, seek out the beauty within this journey we share, and keep embracing the “continual agitation,” the pulsing beat of hope and fear which drives us ever forward, ever upward to the Paradise we seek yet never attain.