Quantum Theory, Dharma Analysis, and That Which Unites and Divides

January 2021
A random conversation about the Buddha and quantum physics on the slopes of Cho Oyu sparked thoughts about rigidity of faith 23 years ago, which continue to this day.
ESSAYS & INSPIRATION, MOUNTAINS & ADVENTURE
division,ken wilber,perspective,Thursday Thought 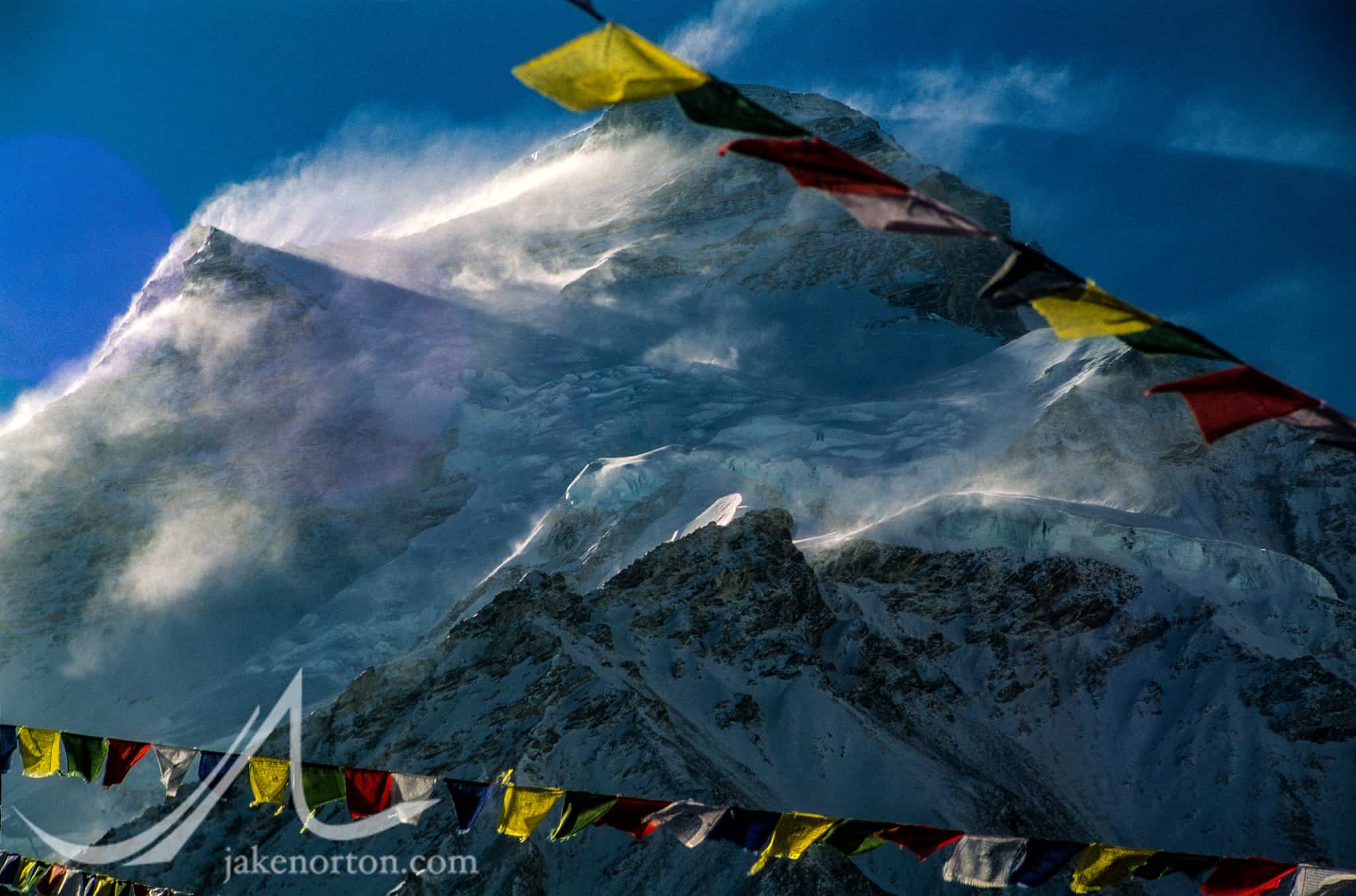 “That’s absurd,” Jim (name changed) said, hints of outrage evident in his tone and manner. “There’s not a single connection - not one! - between what an ancient theologian thought about under a tree and the greatest discoveries of modern physics!”

We were outside the tents at Camp 2 (7,150m/23,458 ft) on Cho Oyu, the world’s 6th-highest peak. It was 1997; I was guiding the trip fresh out of college and a double major in history and philosophy with a focus on the philosophies and theologies of South Asia, while Jim was a client of mine and a nuclear physicist at a highly respected, national laboratory. My final course was Atoms, Nuclei, and Quarks: An Introduction to Sub-Atomic Physics - a course I took only to fill a requirement and get my diploma, but which fascinated me despite my remarkable inability to grasp most of the subject matter.

“I’m not even going to discuss this New Agey crap,” Jim said with disgust. “I won’t even consider it.”

I had unintentionally provoked his ire by comparing the mind-bending discoveries of quantum physics, and particularly the cerebellum-bruising concepts of quantum-mechanical phenomena demonstrated in Thomas Young’s 1803 double-slit experiment to the so-called Dharma Analysis in Buddhism. In a layman’s nutshell, the former demonstrates how photons (light particles) can be, simultaneously, both particles and waves, and also seem to be in two places at the same time, and even seem to change their properties and location when observed: They are effectively in a constant state of flux, always changing, and thus defying the concept of the world, matter, particles, being stable, solid, un-ephemeral. Similarly - in my mind at least - the Dharma Analysis, conceptualized by the Buddha in the 6th century BCE, states that the world we live in and perceive is composed of minute, point-instants in time (Dharmas), which are constantly changing, always dynamic, occupying no real space or time; like Young’s experiment, the Buddha’s thought process seems to deny the existence of the perceived reality we depend upon.

Jim and I never resolved our argument, and while the fine points of the discussion never bothered me much, the overall rigidity of belief his argument displayed is something I have never fully reconciled. Science - like religion, politics, and many impassioned realms we fall into - can lead to a type of dogma, an abject inability to see another side, another perspective, the possibility of overlap in concept and conceit, the acknowledgment that there might be more synchronicity, more commonality, more alignment in belief and values than in superficial division and rigidity of faith.

Those of you who know me - either in person or by through my writing - know that I certainly have my opinions, strongly held and passionately defended. But, I hope you also know that within those opinions I’m always looking for the threads of our common humanity, the tendrils which connect us, which unite us, which bind us together not as Liberals or Conservatives, Americans or Tanzanians, male or female, gay or straight, etc., but rather as humans, as piles of cells who are born to love, and yet learn to hate (or at least fear). My greatest conviction in life is just that: we humans have more in common than we allow ourselves to believe, and we neglect that fact at our collective peril.

This notion of having more in common than we’d think first became apparent to me in 1993 when I lived for a few weeks with a poor village family in Shyam Pati, Nepal, and experienced firsthand that despite vast chasms of linguistic, religious, cultural, and economic divides, my family and I were remarkably similar in our goals, dreams, needs, desires, and outlooks. But, perhaps that sentiment is hardwired. In the mid-1800s, my great-great-great grandfather David Rhodes Sparks wrote this in his Statement of Belief:

But now I have rather given my objections to the religions of the past and present without giving my own views on the subject. It is not for me nor any thinking man to explain his thoughts on this subject unless he has concluded to adopt faith without thought; in fact, faith without thought is consistent. With the power of thought brought into play, faith vanishes and the mind goes out unfettered to fields yet unexplored. I might simply adopt the words of the immortal Paine and say, "The world is my country and to do good is my religion." These words have no equal for grandeur of thought in either old or new testament but I'll attempt a further view of my thoughts on this subject…God to me is everything, is everywhere; he is the universe, the stars, the sun, the earth; he is the human soul, he is the wood and is in the rocks; he is in the air, in the storm and sunshine alike. In part, everything we see about us or in us is the infinite God.

After writing about fences the other day, I found myself going back into the mental archives, thinking about and rereading many of the pieces and thoughts by brains far bigger, infinitely more eloquent, than mine, and repeatedly I came back to one of my favorites, Ken Wilber. It was Wilber’s The Essential Ken Wilber (library access) I was reading on Cho Oyu 24 years ago when Jim and I had our confrontation. Wilber’s words resonate now as they did then, seeking, demanding, begging for us to see our shared humanity, our shared future:

The real intent of my writing is not to say, you must think in this way. The real intent is: here are some of the many important facets of this extraordinary Kosmos; have you thought about including them in your own worldview? My work is an attempt to make room in the Kosmos for all of the dimensions, levels, domains, waves, memes, modes, individuals, cultures, and so on ad infinitum. I have one major rule: Everybody is right. More specifically, everybody — including me — has some important pieces of truth, and all of those pieces need to be honored, cherished, and included in a more gracious, spacious, and compassionate embrace. To Freudians I say, Have you looked at Buddhism? To Buddhists I say, Have you studied Freud? To liberals I say, Have you thought about how important some conservative ideas are? To conservatives I say, Can you perhaps include a more liberal perspective? And so on, and so on, and so on…

There is arguably no more important and pressing topic than the relation of science and religion in the modern world. Science is clearly one of the most profound methods that humans have yet devised for discovering truth, while religion remains the single greatest force for generating meaning. Truth and meaning, science and religion; but we still cannot figure out how to get the two of them together in a fashion that both find acceptable…These two enormous forces — truth and meaning — are at war in today’s world. …And something sooner or later has to give…Within the scientific skeleton of truth, religious meaning attempts to flourish, often by denying the scientific framework itself — rather like sawing off the branch where you cheerily perch. The disgust is mutual because modern science gleefully denies virtually all the basic tenets of religion in general. According to the typical view of modern science, religion is not much more than a holdover from the childhood of humanity, with about as much reality as, say, Santa Claus. Whether the religious claims are more literal (Moses parting the Red Sea) or more mystical (religion invovlves direct spiritual experience) modern science denies them all, simply because there is no credible empirical evidence for any of them…This is a massive and violent schism and rupture in the internal organs of today’s global culture and this is exactly why many social analysts believe that if some sort of reconciliation between science and religion is not forthcoming, the future of humanity is, at best, precarious.

2 comments on “Quantum Theory, Dharma Analysis, and That Which Unites and Divides”