November 2022
It should have been - or at least should have felt - pretty darn perfect. After years of dreaming and a couple of failed attempts, I was standing on the summit of Everest. It was just Karma Rita and me, alone on top of the world. Like me, Karma was on top for his first […]
ESSAYS & INSPIRATION
inspiration,perfectionism,perspective,Quotations,Rebecca Solnit,Thursday Thought 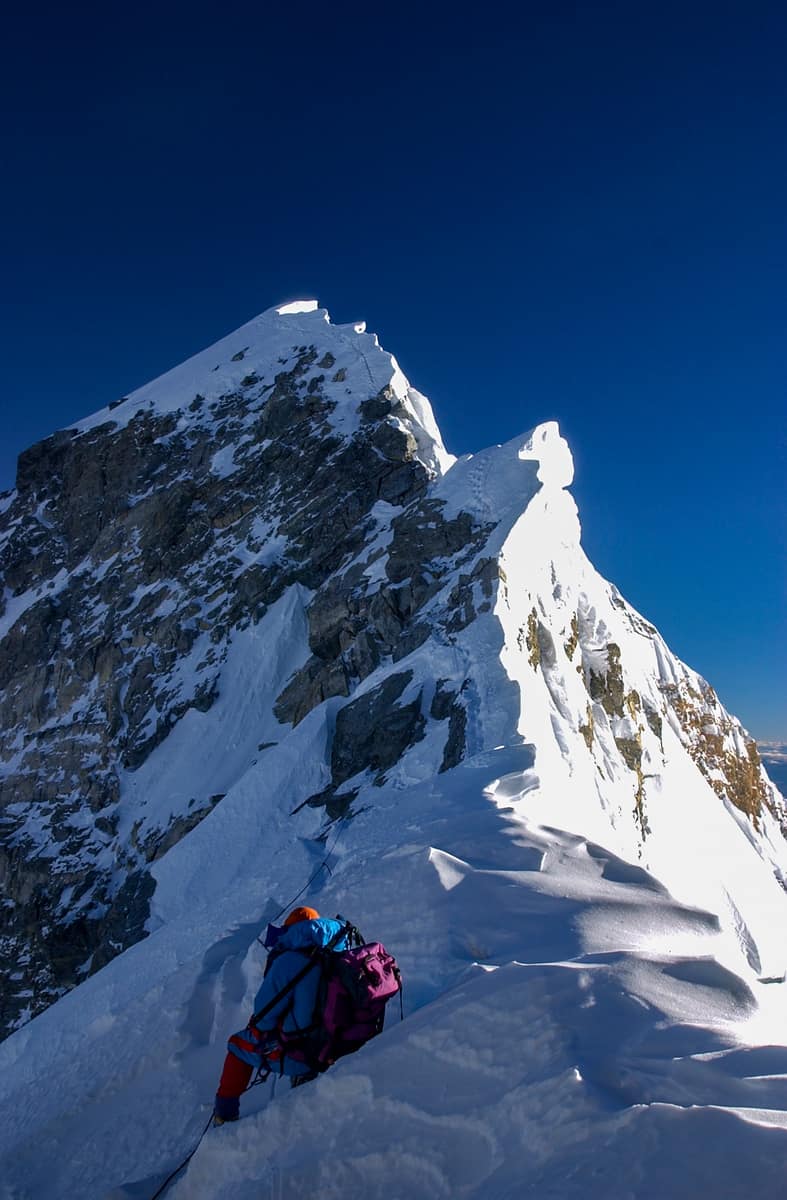 After years of dreaming and a couple of failed attempts, I was standing on the summit of Everest. It was just Karma Rita and me, alone on top of the world. Like me, Karma was on top for his first time.

The wind whipped, fierce and moisture-laden, biting relentlessly into my bared face and hands. We were all alone, 29,028 feet, and the storms we had been watching all morning were here, and they meant business.

We took the requisite photos with snot-caked faces and began our descent. Sixteen years of pursuing Everest for five minutes on top. It was all kind of comical I thought as I edged along the cornices overhanging the Kangshung, or East, face of Everest. It really wasn’t that hard: Karma and I moved fast and strong on a day when everyone else turned around. We covered ground from the South Summit to the summit in only 45 minutes, and were descending into a storm feeling good, strong, health, and confident. We made it down no problem, in good time, without issue.

And there it was: imperfection. There were no epics, no accidents, no deaths or maimings or other moments of hyperbole to build a story worthy of retelling. In the pantheon of mountaineering lore upon which I had been raised, a summit story wasn’t worth much without near disaster, a brush with calamity, some hair-raising epic to punctuate it.

For me, it was just a summit, and an imperfect one because of that.

The other day, I walked the plains east of Boulder with my therapist, discussing this idea of perfection and its implications on anyone’s life, on my life. Together we reflected on how this perception of mine - this relentless pursuit of perceived perfection - has colored, tainted, so much of my life, my work, my experience. How perfection can be the enemy of creativity, the purveyor of diffidence...and yet has essential, positive roles to play when guided properly.

Perfection is a stick with which to beat the possible.

Anyone who is even an occasional visitor here will see quickly a drought in activity for the past several months. I wish I could say that was due to some exceptional expedition, amazing adventure, or even just a prolonged spell of festive thumb-twiddling. But, in truth, much of my silence here stems from the destructive aspect of perfectionism, its stagnating, immobilizing force.

On The Good Men Project, Eric Maisel wrote a great article about perfection and its manifestation in teens specifically, but I think it applies equally well to us adults, or at least to this one. He notes: “If you know that perfect is unattainable, why expend all that energy doing something merely decent, which neither you nor the world will find acceptable...?” For me, not writing, creating, sharing, both here and elsewhere, has become the accepted alternative to producing that which I know will not be, cannot be, perfect. So, I stay quiet, don’t write, don’t share, and rather than ameliorating the issue, it of course festers, grows, builds in power and intensity. The stick of perfection pummeling the possible.

In Psychology Today, Margaret Rutherford, Ph.D. breaks down perfectionism into two strains, constructive and destructive. The former, she says, is “is striving for excellence yet remaining process-oriented.” It is about working to perfect the journey rather than the outcome, accepting mistakes and imperfections while always striving to improve.

Destructive perfectionism - the one I and many others struggle with - “is all about the goal, the prize, the end product... you constantly focus on meeting and exceeding the expectations of others. But a vicious cycle is formed --- for there's always the next expectation. And then the next.”

Back on Everest, I began that day in 2002 with my perfection definition focused on climbing well, staying safe, returning home. Once that happened, perfection morphed into reaching the summit - I wasn’t there yet. Finally, on the summit, the perfect stick thwumped again, moving the goalpost, the expectation, just a little further away, just a little out of reach. Impossible.

Same with writing, creating, engaging, sharing here: The evil little voice in my head tells me constantly to produce only that which is perfect. Of course, I do no such thing, and the cycle begins, apathy reigns.

And yet, perfectionism has its, well, perfect aspects. It is the guardrail keeping the hurtling car of creativity on the highway. It’s the dream in the distance keeping the embers of hope and inspiration alive. It’s the hazy vision of utopia on the far horizon, forever motivating us to keep going, keep moving, keep striving, keep improving.

But, maybe perfect, perfection, perfectionism, even in a softened, coddling version like “constructive perfectionism” still misses the point, fails in its aim. I’ve begun internally to use a different word, mastery, to define it, as mastery encompasses all the good while jettisoning the bad. In The Rise: Creativity, the Gift of Failure, and the Search for Mastery, Sarah Lewis writes:

Mastery requires endurance. Mastery, a word we don’t use often, is not the equivalent of what we might consider its cognate --- perfectionism --- an inhuman aim motivated by a concern with how others view us. Mastery is also not the same as success --- an event-based victory based on a peak point, a punctuated moment in time. Mastery is not merely a commitment to a goal, but to a curved-line, constant pursuit.

- Sarah Lewis, The Rise: Creativity, the Gift of Failure, and the Search for Mastery (library)

So, on this Thursday, in this Thursday Thought, I’m vowing to master my perfectionism, not focus so much on the end result as in the overall process, and to keep creating, growing, thinking, and sharing. I hope you'll join me.