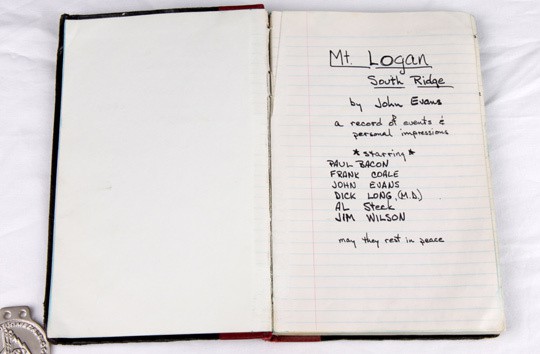 “You should come up to Evergreen and have dinner with my brother, John, sometime. He’s done some big climbs over the years and you two would enjoy talking,” Rick said. At the moment, I didn’t make the connection between the last names. Rick Evans…John Evans…Legend, hero, amazing climber.

A few weeks later, still naïve, I walked into an unassuming house in rural Evergreen, Colorado. John’s wife, Loie, greeted us graciously, and I walked past pictures of stunning peaks – Antarctic, Arctic, Himalayan – and into their humble home. It was beginning to sink in: The John Evans I was about to dine with was that John Evans…the John Evans who has two unrepeated first ascents of second continental highpoints (NW Ridge of Tyree, Hummingbird Ridge of Logan), who was with Willi Unsoeld and John Roskelly on the fateful, tragic 1976 expedition to Nanda Devi, who attempted Everest’s West Ridge, and more. Wow.

In the years since, I’ve seen John infrequently – despite now even living in the same town – but the few times we’ve shared together have been great ones. Like all my climbing heroes, what draws me to – and inspires me about – John is his honest “aw shucks” attitude. One could sit with John for hours, talking about climbing, and never hear him brag about his feats and his legend. He’s one of a rare breed, who climbed hard and high for many years simply for the passion of it; he made his living primarily as an Antarctic logistics coordinator for Raytheon.

And, he’s one who thinks less about the fame a summit or route will provide, and more about the philosophy and nature of adventure underlying the topmost patch of snow. John generally looked for the more difficult, sublime, and uncertain climbs, seeking out challenge instead of repeating a route already done. While at Camp III on Mount Tyree – Antarctica’s second highest peak – on January 4, 1967, John and his climbing partner – the late, great Barry Corbet – got into a discussion of Hornbein and Unsoeld’s ascent of the West Ridge of Everest in 1963 – a climb in which Corbet himself was instrumental. John wrote in his journal:

Been sorta thinking of the tremendous coup Unsoeld and Hornbein pulled off on the West Ridge of Everest and comparing our small aspiration with theirs. Barry must have been thinking the same as he brought up the subject, remarking that the climb ahead of us was, technically, “a hell of a lot harder than theirs.” But, I’m certainly glad to have the cold and technical difficulties rather than the altitude.

The following night – hours before making the first and only ascent of Tyree’s NW Ridge – John penned a thoughtful letter to his friend Phil Smith about the uncertainty he and Corbet faced, writing:

The uncertainties in the outcome include a mile of horribly serrated ridge starting at about 14,000 feet or so and culminating at the summit of Tyree…temperatures probably around -30°F, scanty food supplies, and, most of all, the weather, which makes us try to be exceedingly watchful that we don’t get caught in something (wind) that would make it impossible to get back. How’s that for an exhilarating bunch of uncertainties? Fortunately Barry is a splendid climber and companion, and even if we get no further than today, morale is high and the conversation stimulating. Wish you were here to feel the experience yourself!

For most of his career, John’s climbing feats have been relatively unknown. But, that has now changed; John’s journals from all his major expeditions are now published digitally and for sale via Amazon and iTunes. These are rare glimpses into the real, unedited events of amazing expeditions to the world’s highest peaks – and some of the greatest climbers in history – and not to be missed. Take peek at John’s website, and find the books and journals online here:

As a personal aside, when I was Director of the American Mountaineering Museum in Golden, Colorado, we were presented with a fascinating artifact from John: the flag of Alaska Methodist University that Bill Long planted on the summit of Vinson on its first ascent with John in 1966. The flag was left in place, then found and taken by the second ascent team…thirteen years later. In 2008, Peter von Gizycki returned the flag, and it was in turn donated to the Museum. As luck would have it, I was soon thereafter heading to Vinson to help bring Eddie Bauer back to the great southern continent; they were an instrumental sponsor of the original 1966-1967 American Antarctic Mountaineering Expedition. The flag, it was decided, should make one final journey to the top of the continent and back again, which it did, reaching the summit it sat on for 13 long years one more time on Januray 10, 2011.

One comment on “Legendary Climbs of John Evans Now Available”