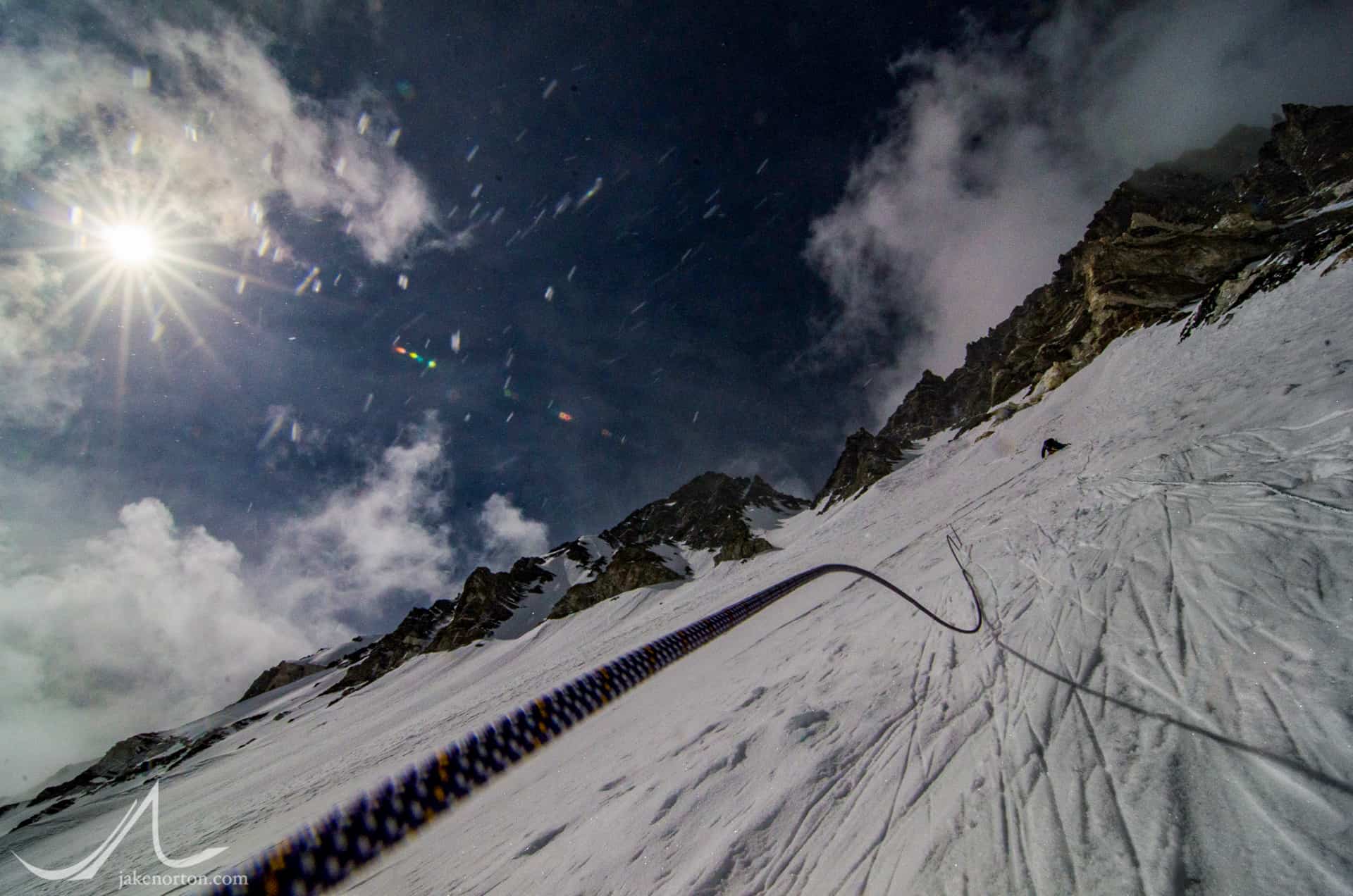 “We might be stuffed, but sure glad we’re not over there,” Dave said as he reached the belay.

He gestured over his right shoulder, across the chasm of the Western Cwm to the Lhotse Face, where a conga line of climbers - between 250-300 of them - inched their way, nose-to-butt, up the fixed lines.

“Jesus, that’s insane,” I replied in dismay. “There’s going to be carnage in a couple days is my guess.”

We were alone on our route, just two climbers on a sheet of ice trying to reach the West Shoulder, knowing there wasn’t the slightest chance we’d climb the mountain via the West Ridge as we (and our two other teammates below, Charley Mace and Brent Bishop) had planned. Conditions were bad - ice instead of snow thanks to a dry winter, incessant rockfall all around - but we had decided to make the best of it, climbing as high as we could and sharing an incredible experience.

It was May 17, 2012, and the climbers we saw across the valley were headed to Camp 3. The next day, they would push to the South Col - high camp - and from there the summit swarm would go for the top of Everest. But, it was too many people. Too many to safely pass and negotiate the simple-but-bottlenecked terrain between the South Summit and the summit. Too many whose sole focus was the top, the little patch of snow on the roof of the world being their sole barometer of success. Too many who would be unwilling to turn around, either because of inexperience or a Type-A expectation of being able to make the mountain bow to their wishes. Too many people to not have an accident occur, a tragedy, a death, or more, or worse.

Sure enough, on May 19-20, six climbers would lose their lives on the upper slopes of the mountain, bringing the death toll for the season to 10 (11 if you count the Czech climber who died on Lhotse) - the highest number of fatalities on Everest since the tragic season of 1996.

Death, of course, is not new to climbing or Everest. The first climbing deaths on the mountain came in 1922, when seven Nepali porters were killed by an avalanche below the North Col. Seven fatalities were recorded in 1970, six each in 1974 and 1979, eleven in 1982 (including luminaries Peter Boardman, Joe Tasker, and Marty Hoey), nine in 1984, and so on. The difference, though, is the manner of death in the vast majority of cases. Until recently, most people died in climbing accidents: falls, avalanche, icefall, etc. It was the exception rather than the rule for climbers to die on Everest from exhaustion, from climbing too far and too high for too long and simply running out of energy to get back down again. (One glaring exception to this rule are the two most famous Everest deaths, George Mallory and Andrew Irvine in 1924, who most likely died in large part due to exhaustion and pushing too far.) In 2012, however, the majority of the climbing deaths (i.e., above basecamp) were due to exhaustion or Acute Mountain Sickness (AMS) brought on by exhaustion and exposure.

Those sobering stats beg - perhaps demand - a simple yet important question: Why climb Everest? It’s a question asked a million times, and increasingly I feel the common answer is simplistic: To get to the top. To summit. To check that milestone off the bucket list and move on. The answers are not dissimilar to the shallow focus we see in many other realms: Working to get a paycheck. Studying to get a diploma. Running to win a race and playing to get the trophy. While not inherently bad or malicious, the perennial challenge with this type of thinking is that it limits one’s options and potential courses of action to a linear path leading to the paycheck, the diploma, the summit. Those things are viewed as the sole barometers of success: Attain them and you win, miss them and you fail. Don’t deviate from the path; continue from point A to point B.

In his wonderful book Start with Why, Simon Sinek put it succinctly:

Every single person, company, and organization on the planet knows WHAT they do…Some companies and people know HOW they do WHAT they do…Very few people or companies can clearly articulate WHY they do what they do.

- Simon Sinek, Start with Why

As I belayed Dave up the next pitch, tethered tightly to a couple of ice screws on the steep face, I heard the bone-chilling, spine-tingling whirrrrrrrrrr of rocks hurtling through the air. Looking up, a half dozen softball-sized orbs had loosed from rock bands 500 feet above me, their aim good and true. In a lucky game of karate, I swatted several away, but one was slow, steady, determined, and hell-bent on my forehead. In a stroke of dumb luck, it hit the thin bamboo wand we had placed to mark our anchor, the tiny resistance just enough to alter its course, sending it screaming past my head, missing by millimeters.

I thought immediately of the photo, tattered and worn, tucked into my down suit: my wife, Wende, and my two kids, Lila and Ryrie. Why? Why was I there? If I didn’t make it back down, would Lila ever understand? Would Ryrie, fatherless at age three, barely knowing his Dad? Would Wende, left suddenly a single mother of two? Would I, tittering off into the ether, ever forgive myself? The answer to me was abundantly clear: No, there had to be more.

On the TED stage, Adam Grant notes that: We live in a culture that worships at the altar of hustle and prays to the high priest of grit. We tend to define success simplistically, equating it with hustle (the what, the action) or grit (the how), and we often miss the why completely. He continues:

But sometimes, that leads us to keep going when we should stop to think again. Experiments show that gritty people are more likely to overplay their hands in casino games and more likely to keep trying to solve impossible puzzles. My colleagues and I have found that NBA basketball coaches who are determined to develop the potential in rookies keep them around much longer than their performance justifies. And researchers have even suggested that the most tenacious mountaineers are more likely to die on expeditions, because they're determined to do whatever it takes to reach the summit.

- Adam Grant, What frogs in hot water can teach us about thinking again

Dave and I ultimately turned around on that day, having pushed our route upward as high as we felt comfortable. We could’ve gone higher, pushed into the swirling cloud, falling rock, and uncertain outcomes of the terrain above. But, we both knew that wasn’t why we were there: our climb was about telling a story, not tagging a summit. We went back down disappointed, but not defeated; lacking a summit, but perhaps not success.

“Why?” is definitely not an easy question to answer. Sinek pokes at it, Grant prods, and I think all of us could use a reminder to hit pause for a second, to rethink our ambitions, our motives, our individual and collective definitions of success. And, maybe reflect on the words of Charlie Houston who came the closest to capturing why we climb:

Why climb mountains? The answer cannot be simple. It is compounded of such elements as the great beauty of clear, cold air, of colors beyond the ordinary, of the lure of unknown regions beyond the rim of experience. The pleasure of physical fitness, the pride of conquering a steep and difficult rock, the thrill of danger - danger controlled by skill - are also there. How can I phrase what seems to me the most important reason of all? It is the chance to be briefly free of the small concerns of our common lives, to strip off non-essentials, to come down to the core of life itself: food, shelter, friends. These are the essentials. These plus faith and purpose and a deep and unrelenting determination. On great mountains, all purpose is concentrated on the single job at hand. Yet the summit is but a token of success. And the attempt is worthy in itself. It is for these reasons that we climb. And in climbing, we find something greater than accomplishment.

For extra credit, listen to Charlie speaking with his friend, Bill Moyers, in the video below, or watch the full version here (requires Flash, unfortunately). And, be sure to listen to Simon Sinek’s TED talk as well as Adam Grant’s talk.

And, let me know what you think in the comments below.