November 2009
I've long been an admirer of Harold William "Bill" Tilman (1898-1977). I first encountered his name – and his legend – on my first trip to Nepal in 1992. My trip leader, Nick Yardley, and our sirdar, Urgen Sherpa, pointed out a distant, rugged pass leading from the Langtang Valley into the Jugal Himal and […]
ESSAYS & INSPIRATION, MOUNTAINS & ADVENTURE
Quotations,Thursday Thought 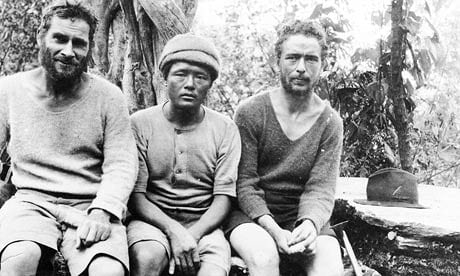 I first encountered his name – and his legend – on my first trip to Nepal in 1992. My trip leader, Nick Yardley, and our sirdar, Urgen Sherpa, pointed out a distant, rugged pass leading from the Langtang Valley into the Jugal Himal and on to Paanch Pokhari (Five Lakes) called Tilman's Col. Nick explained that it was first explored by Bill Tilman back in 1949.

Since then, I've come to "know" Tilman as the ardent explorer he was. A true pioneer and often labeled "the 20th Century's last true explorer" – a label he would no doubt scoff at – Tilman logged countless miles in the remotest corners of the globe. He relished climbing peaks that were proverbially "off the map", and made every effort to break new ground in all that he did.

Like many of his generation, Tilman was also a war veteran, and was decorated for his service in both World Wars. When he decided many of the more popular ranges were getting too crowded, Tilman bought a sailboat, taught himself to sail, and began 25 plus years of exploration in the Arctic and Antarctic waters looking for new peaks to climb.

In his career, Tilman achieved great things. Some of his accomplishments are:

But, what I've valued most about Tilman in reading his books
– and in reading what others had to say about him – is his work ethic, his value of teamwork, ethics, and philosophy about the mountains and the mountain way.

Interestingly, though, you won't find much on the web about Bill Tilman. There is a wonderful site by Bob Conlay, who sailed with Tilman and adventured with him from 1956-1977. And, there's David Glen's book WARRIOR WANDERER The Life and Times of the Legendary Explorer Bill Tilman. There's also Treescaper's album on his travels with Tilman on Flickr. Other than that, not too much.

Perhaps it's Tilman's zest for exploration rather than notoriety, and his humble (but tough), somewhat enigmatic ways that have kept him out of the limelight. And, that's probably how Tilman would have liked it; as Glen writes, Tilman was "a man whose basic shyness and reticence to boast of his astonishing achievements belied a great sense of honor in the way he conducted his life."

And, I would add, perhaps in the way he conducted his death: In 1977, at nearly 80 years old, Tilman set sail in the tug En Avant with five others. On November 1, 1977, the left Rio de Janeiro, bound for the Falkland Islands. They disappeared without a trace…

So, below are some of my favorite quotes – mostly by but some about – Bill Tilman. Enjoy!

The truism that we climb on the shoulders of our predecessors is sometimes forgotten, and it is difficult to exaggerate the important of the part which earlier failures play in the final success. The Himalayan peaks over, say, 23,000 ft. which have been climbed at the first attempt can be numbered on the fingers of one hand, and even if the present climb be cited to the contrary, the answer is that we had the inestimable advantage of knowing where to make our effort and how to get there – knowledge gained for us by our forerunners. And apart from previous experience on the actual mountain there is the vast fund of accumulated knowledge of high climbing in general to draw upon; for though experiences may be "the name men give to their mistakes" it does not lessen their value to those who are willing to learn.

It was but a short three months that we had met, many of us strangers, but inspired by a single hope and bound by a common purpose. This purpose was only achieved by team-work, team-work the more remarkable on account of the two different nationalities; and though these two nations have a common origin they are for that reason more critical of each other's shortcomings – as relationship leads proverbially to ill-feeling. The Americans and ourselves do not always see eye to eye, but on those rare occasions when we come together to do a job of work, as, for example, in war or in the more serious matter of climbing a mountain, we seem to pull together very well...There each man pulled his weight each must share the credit; for, though it is natural for each man to have his own aspirations, it is in mountaineering, more than in most things, that we try to believe:
The game is more than the players of the game,
And the ship is more than the crew.

We live and learn, and big mountains are stern teachers.

– from Two Mountains and a River

After the first joy in victory came a feeling of sadness that the mountain had succumbed, that the proud head of the goddess was bowed…[That night] each little incident of the climb was gone over again and again, and I remember, in the small hours when the spark of life burns lowest, the feeling which predominated over all was one of remorse at the fall of a giant. It is the same sort of contrition that one feels at the shooting of an elephant, for however thrilling and arduous the chase, however great has been the call upon skill, perseverance, and endurance, and however gratifying the weight of the ivory, when the great bulk crashes to the ground achievement seems to have been bought at the too high cost of sacrilege.

Tilman was always first away in the morning, carrying a load in excess of the standard Sherpa load. He always arrived first at the day's destination. Sometimes he would run along parts of the route. He would have tea brewing by the time the rest caught up with him and then he would praise those who had made good time, and yell and scream at those he thought had been lazy or lacking in some way. On at least one rest day he made all his Sherpas a cake. Tashi, the Sherpa who was translating all this for me, was made to repeat this fact several times. He was always the first to cross turbulent streams, pass hard rocky sections, and shoulder awkward loads.

Put on a good pair of boots and walk out the door.

-H.W. "Bill" Tilman on how to have an adventure