Reassembling the Past, and the Dead

February 2021
On two expeditions to the Sky Tombs of Upper Mustang, Nepal, I was able to film and photograph an amazing team of climbers and scientists as they pieced together the ancient history of the region.
MOUNTAINS & ADVENTURE, TRAVEL
Moments Memories Mountains,Nepal,travel,Upper Mustang 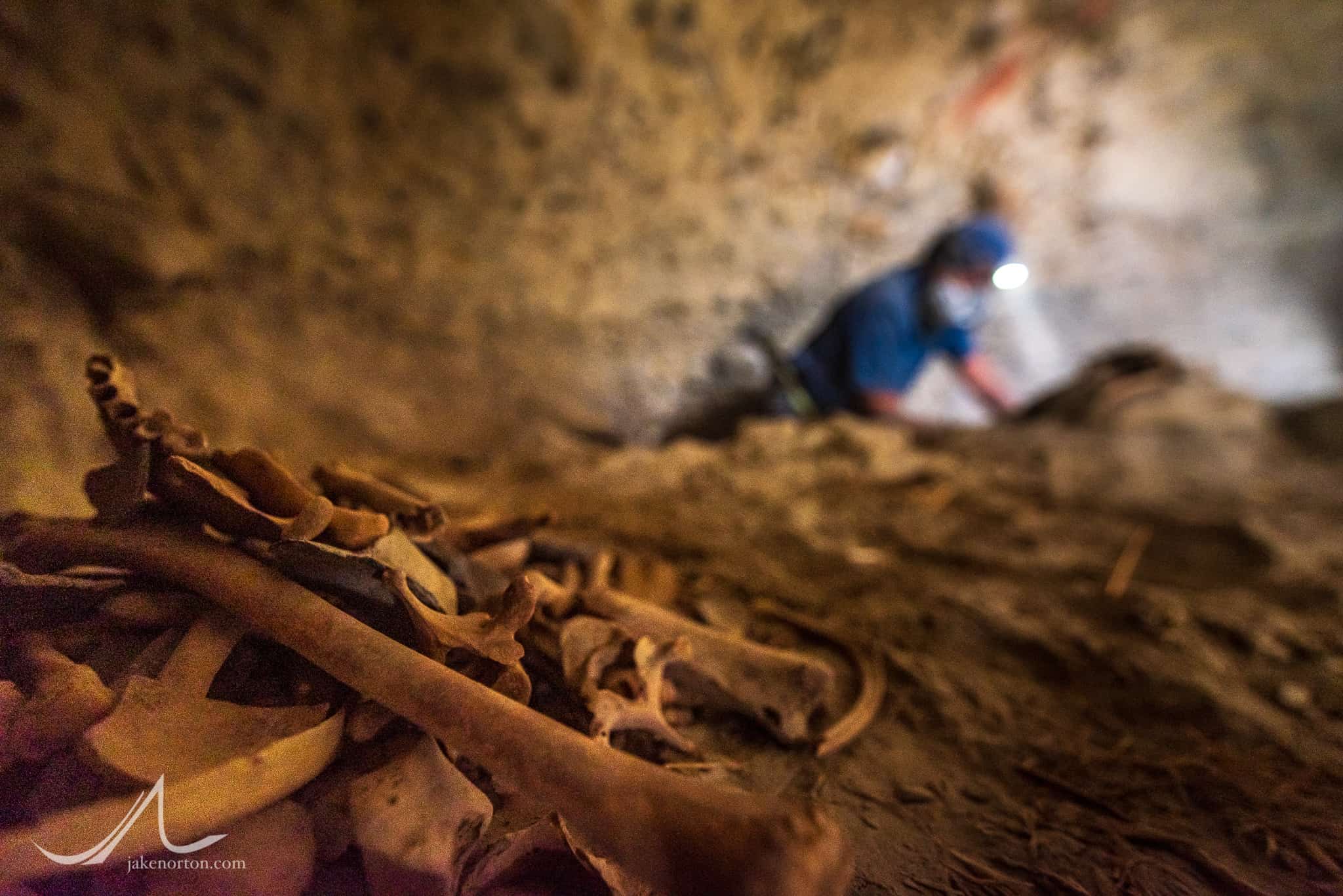 I first heard of Upper Mustang in 1993. Charles Ramble, a British anthropologist and academic, spoke Indiana Jones-like (albeit with an accent, higher intellect, and less cowboy fanfare) to our entire SIT-Nepal program. We sat on the floor, mesmerized by his tales of this semi-autonomous kingdom of northern Nepal, annexed in 1795 but remaining largely unchanged in all ways. Charles was one of the first outsiders to enter the Kingdom in the modern era, and among countless points of interest, he was particularly focused on caves...caves little known and barely studied, part of ancient Mustang, containing pre-Buddhist documents, artifacts, and remains, shreds from the fabric of time somehow surviving to the modern era.

I was fascinated. I wanted to go to Mustang, I wanted to learn and explore and help unravel some of this story of Himalayan anthropology.1 Ah, heck, let's be honest - I wanted to be like Charles.

It took some time - 22 years to be precise - but in August 2015 I rumbled in a rickety jeep with a team of academics, climbers, and archeologists into Upper Mustang.

The landscape of Upper Mustang is jagged, raw, ethereal. Tucked in the rain shadow of the Nepal Himalaya, the region is politically Nepalese, but definitively Tibetan in all other aspects. High, dry, and dusty, it's a canvas of earth tones pocked with splashes of vibrancy where humans have settled and somehow persuaded crops to grow.

Slicing like a scythe through the heart of Upper Mustang is the mighty Kali Gandaki, her name invoking both the fierce goddess Kali - consort of Shiva and destroyer of evil - and also the dark color of the river. The latter comes from her remarkable course, sliding out from the Nhubine Glacier on the Tibetan border, joining forces with other streams and flows until she becomes the ferocious life-giver (and sometimes destroyer) of the region, providing water to this arid realm. The Kali gets credit also for the sculpted landscape, her rushing waters carving sweeping buttresses of cobbled stone and impossibly deep canyons; the deepest in the world, called the Andha Galchi or Kali Gandaki Gorge, runs between Annapurna and Dhaulagiri, with a vertical relief of over 18,000 feet.

We came here, though, not so much to marvel and look at this wild landscape, but rather to marvel at, look at, and investigate what is in this landscape. Dotting the towering walls chiseled by the Kali, in nearly every valley and on every aspect, are caves; myriad caves, over 10,000 of them, whittled from the mountainsides over centuries, big and small, new and old, some easily reached by foot and others requiring aid climbing or long rappels to access.

One cave - Rhirhi - held particular interest for our archeologist, Mark Aldenderfer. His team2 had explored it previously, but not completely, and he believed within its confines lay more human remains, possibly some of the oldest yet found in the region.

For hours Mark and his team from the Nepal Ministry of Archeology dug through the dust, hunched over in the hand-carved cave, chipped out of the rock several millennia before by a people little known and less understood. One by one, bones emerged. A rib here, a vertebra next, some tarsals and phalanges, then more ribs. Some were marked with ochre, a ruddy red barely visible on long bones; this would later be determined to have been applied long after death and burial, likely in a later era in hopes of purifying the cave of past pagan evil. While the bones were plentiful, other artifacts we sadly missing: Rhirhi, as we knew, had been plundered over the years, human remains left behind while valuable artifacts had been carted off and sold on the black markets.

Eventually, all was catalogued and bagged, and we rappelled back down from Rhirhi to wash up, emerging from the caves of the dead to the land of the living.

The significance of the finds that day and others wouldn't be known for another year. In 2016, we returned to Upper Mustang for more exploration, and to finally go through the items uncovered in Rhirhi, in caves high above Samdzong, and more. The results were pieced together by Mark's power team of archeologists, bio-archeologists, dental bio-archeologists, dendrochronologists, and more with titles I can barely pronounce, let alone comprehend. From Rhirhi Cave, the human remains dated back about 3000 years, perhaps more. From Samdzong, "only" about 1200 years, but those remains included a complete skeleton of a young man with only the bones of one toe missing. Mixed within the Samdzong remains were gilded, golden masks of remarkable artisanship, an intact funerary box, fire sticks, dorjes, and many other ritual objects and artifacts.

Perhaps more interesting, however, was the evidence of post mortem ritual done on the bodies. All showed signs of defleshing: after death, the flesh was completely removed from the body using a sharp and relatively advanced knife or similar tool. This is similar to, but also considerably different from, the Tibetan Buddhist practice of sky burial where the body is dismembered and placed on a hilltop to release its spirit and return to the earth. In the Mustang case, the flesh was removed but the skeleton placed carefully into a cave tomb with many ritual adornments.

For Mark and his team, this indicated the presence of pre-Buddhist rituals in ancient Mustang, coupled with artistic evidence pointing to vibrant trade routes connecting the region with the Silk Road and beyond. In all, Mark and his team have made huge discoveries in Upper Mustang, helping piece together answers about the earliest humans to settle in this remote high-mountain region, their habits, culture, religion, and more. (Check out the documentary produced from the expeditions, Sky Tombs of the Himalaya, available on Sky Vision and PBS-NOVA.)

It took me 22 years to get there, and I never became even remotely reminiscent of the swashbuckling Charles Ramble of 1993; but, it was beyond humbling to learn from and share with this team unraveling the past, piecing it together bit by bit, and constructing a better understanding of the present and future.

1. I wasn't alone in my fascination. My classmate Sienna Craig was also entranced by Mustang, and built her entire career around studying, understanding, and helping preserve, protect, and empower the people of the region. ⤴

2 comments on “Reassembling the Past, and the Dead”