September 2014
When I first met him, I was pretty sure he was just a random drunk wandering around the Garden of the Gods. We were climbing a small route in the Garden, teaching friends to climb on what was supposed to be a 5.8, but felt more like 5.10. That’s when he approached, crooked teeth – […]
MOUNTAINS & ADVENTURE, NEWS
climbing,History,in mem 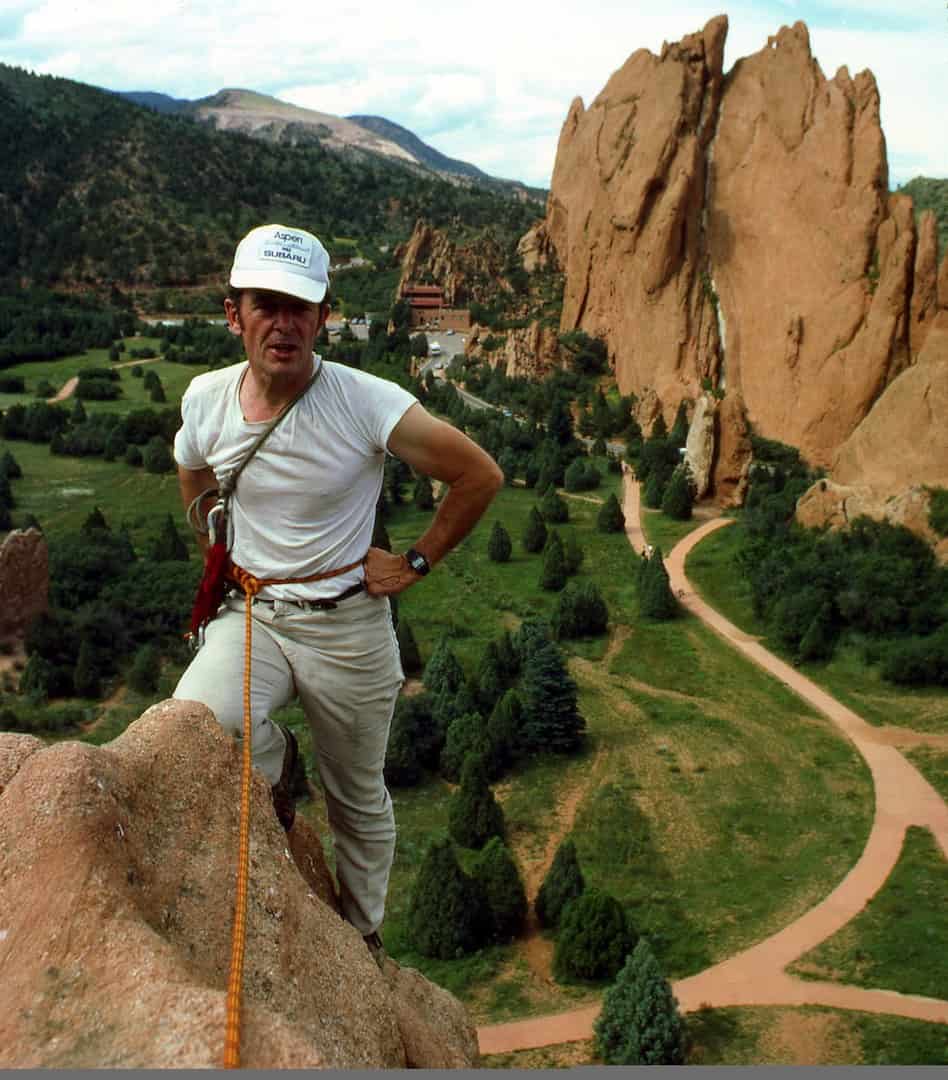 When I first met him, I was pretty sure he was just a random drunk wandering around the Garden of the Gods. We were climbing a small route in the Garden, teaching friends to climb on what was supposed to be a 5.8, but felt more like 5.10. That’s when he approached, crooked teeth – with many missing – poking through a big smile.

“When I put up that route in ’58, there was an undercling to the right over there that made it much easier. It broke a few years back, though,” the guy said. His dusty white Reeboks, tattered sweatpants, and ratty, plaid shirt reinforced for me that this guy was a drunk, his stained white ballcap tilted awkwardly atop his head. If not a dunk, I thought, he most certainly couldn’t be a climber. He smiled again, a big, wide, toothy smile, and stuck out his hand…a giant, rough, calloused bear paw of a hand. “Harvey Carter,” he said by way of introduction, and waltzed off.

We quickly forgot the encounter with yet another Garden weirdo, and kept climbing. Ten minutes later, we saw that same white cap and plaid shirt bobbing solo up South Gateway Tower, climbing a 5.8 route called West Point Crack. I grabbed our dogeared Garden guidebook, asking as I did: “What did that guy say his name was?”

“Harvey something,” said a friend. And there it was: West Point Crack, First Free Ascent: Harvey T. Carter, 1958.

“Holy shit, you guys, take a look at this,” I said in amazement as I looked at the dozens and dozens of routes – first ascents – put up by Harvey throughout the Garden.

As the years went by, I’d run into Harvey from time to time, usually as he prowled around the Garden, his backyard crag. He’d point out “interesting” routes he pioneered decades before, noting that they probably hadn’t seen second ascents, and giving is beta on the climb. “People don’t like this route because it looks like there’s no pro. But in that pocket up there I pounded a pin 3 inches into solid sandstone, so it’s good!” Those were his usual words of encouragement before sending my friends and I off to feel near death on a climb he did some 50 years before.

Hard headed and cantankerous, Harvey’s demeanor likely kept him relegated to relative obscurity…despite his many remarkable accomplishments. While disputed, he claims more than 5,000 first ascents over his climbing career, and I personally wouldn’t doubt him. If true, that number puts him in a small, select group of the most prolific and accomplished climbers ever. He did countless first ascents around his home turf in Garden of the Gods, North Cheyenne Canyon, and along Independence Pass above Aspen. Harvey also established many of the routes in the famed Fisher Towers, including classic Sundevil Chimney on the Titan; he also did the first ascent of the Northcutt-Carter route on Hallett Peak, one of the famed 50 Classic Climbs in North America. Add onto that resume that Harvey also started Climbing Magazine in 1970 with $900, and organized the first formal bouldering competition, in 1956, and you have a guy that was truly a legend of climbing.

True to his core, Harvey continued to climb until his battle with prostate cancer stopped him. The cancer took his life on March 13, 2012, at age 83.

But, Harvey’s legacy lives on in his archives, which are now a part of the American Alpine Club Library. The records are also contending for “Colorado’s 2014 Most Significant Artifact“. Take a peak at the collection, and make a vote!