September 2020
Fear. We can let it consume us with certainty of failure — and failure we become — or we can turn it into focus, walk across that ladder, and embrace all we can be, all we want to be.
ESSAYS & INSPIRATION
Everest,fear,perspective 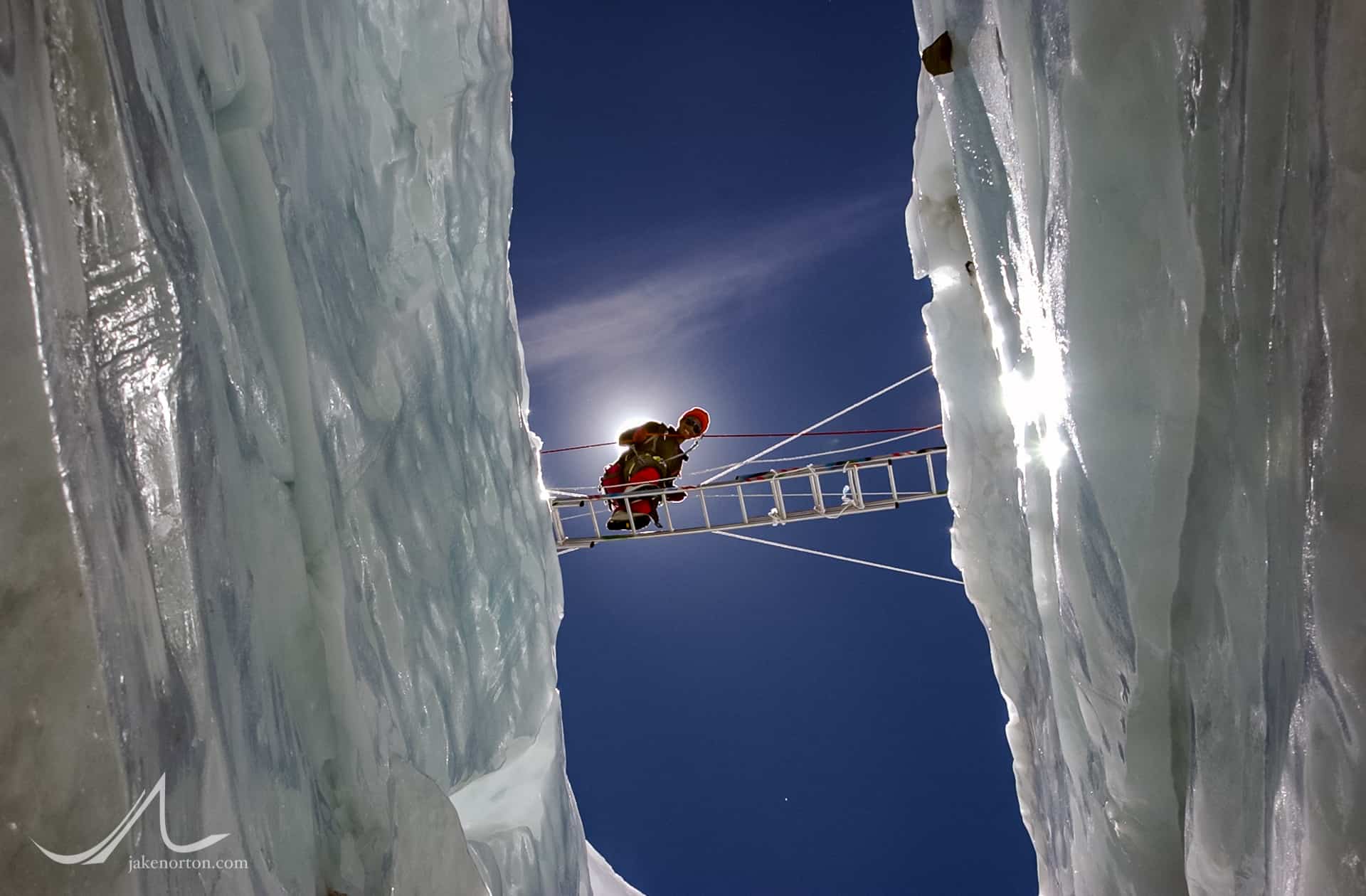 I’ve never thought of myself as a fearful person. In fact, much of my life and career has been focused on managing and moving through fear, learning how to take a deep breath, focus, and just take another step.

Strangely though, in recent months a type of fear-based paralysis has taken over me. I still get out and wander alone for hours, bushwhacking through the backcountry, scrambling up remote domes and through hidden canyons of the Mount Evans Wilderness. Those fears, while perhaps more significant in some respects, pale in comparison (in my mind) to the fear I’ve developed recently of “putting myself out there.”

As many of you have likely noticed, I’ve been posting much less in the last six months, sharing my views, thoughts, and ideas less frequently. Much of that emanates from an innate lack of confidence brewed with mid-life questioning, reinforced by questions sparked by losing (a portion of) my identity as an athlete with Eddie Bauer. That has left me feeling somewhat rudderless and insignificant, and thus reticent to share as openly and widely.

And, it’s more than that, if I’m being honest: the brew above has been seasoned recently with the paradoxical toxin of privilege. Let’s cut to the chase: I’m a 46 year old straight, affluent, white guy who walks up mountains and takes pictures. My background and being is the direct result of so much of what ails us as a nation, as a people, and thus — it seems to me — my perspectives and perceptions, thoughts, feelings, and opinions are of questionable validity: Who am I to speak of society, culture, racism, inequality, and any of the issues so pressing in our time, when so much of me is directly derived from our collective reckonings?

I speak a lot to audiences about fear, and how to handle it, using the example of crossing crevasses on ladders in the Khumbu Icefall. I remember well my first ladder crossing back in April, 2002: I took the first, tentative step onto the ladder. It bounced and swayed beneath my feet, my crampons scratching the aluminum rungs like nails on a chalkboard, the gaping, icy, cold unknown lurking far below. At first, I froze. And then, as fear triggered my amygdala’s fight-or-flight response, numbing the rational neocortex and taking over the scene, I was gripped by another emotion: to run, to fight, to save myself from the doom that seemed so imminent.

But, I didn’t run, I didn’t hide, I didn’t fight…I didn’t listen to my amygdala, but rather did what I learned to do in countless scary, risky situations in my climbing career: I took a few breaths. I slowed my fidgety senses, soothing the lizard brained amygdala and allowing the wizard-brain to come back online. It was only a ladder afterall, a ladder composed of sturdy aluminum rungs. I could walk over a ladder, one rung at a time, if it was on the ground; there was no difference here — the rungs were the same, just the risk level was higher. In time, I was able to harness the focusing power of fear, the power that was focusing all my attention on the hole beneath my feet rather than the rungs underneath them, and use it in turn to focus all my energies on the job at hand — walk across a ladder — rather than on the consequences of a potential failure.

Fear. We can let it consume us with certainty of failure — and failure we become — or we can turn it into focus, walk across that ladder, and embrace all we can be, all we want to be.

I’m on my ladder now, taking a deep breath, and focusing on that next step. As Toni Morrison wrote:

“This is precisely the time when artists go to work. There is no time for despair, no place for self-pity, no need for silence, no room for fear. We speak, we write, we do language. That is how civilizations heal.

“I know the world is bruised and bleeding, and though it is important not to ignore its pain, it is also critical to refuse to succumb to its malevolence. Like failure, chaos contains information that can lead to knowledge — even wisdom. Like art.”

It’s time to keep on climbing.